With the recent hero balance patch implemented on January 31, KOG made changes to make PVP/PVE comps more flexible as the rest of the SR pool can easily be overshadowed by the usual picks since last year. I made a “before and after” doc about that one too so we can easily compare.

What Gives a Support Character Value?

First off, we need to assess what is expected and what is needed from a support hero in the current meta for both PVP and PVE. Dungeons and raids are getting harder and with Zero just releasing and Asin might be coming soon,  it will definitely save you a truck ton of resources if you know who to prioritize on growing first.

As a support, you’re mainly expected to have:

Tankiness and damage are huge bonuses. Heal can be rarely found in other heroes and is usually the reason why a support is picked up. And that’s why its important to assess because you might be overdoing certain aspects of the comp and neglecting to balance your line-up.

Let’s focus on the three mentioned above first.

There are currently 4 SR supports in the pool: Amy, Lime, Rin and Serdin. Take note that the numbers presented here are based from the in-game description. Therefore, all of these are the base amount. 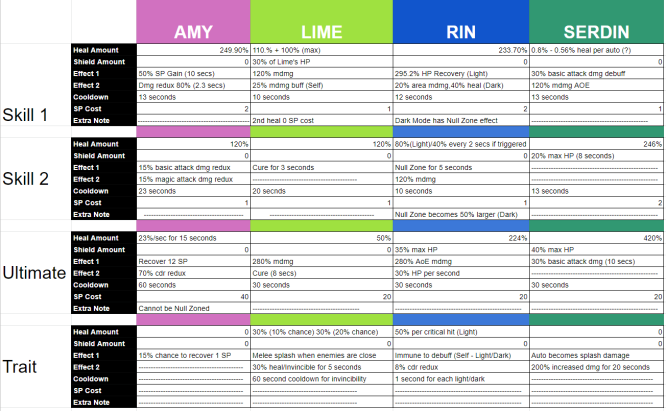 ‘Right-Click’ and ‘View Image’ to see a bigger image

There’s honestly no best support hero for me. It just really depends what you need and what your play style is. There are supports great at shielding, healing, debuffing and as well as dealing damage. (I’m looking at you,Serdin).

Amy is a healing machine. She may have 0 shields but her damage reduction buffs on both her Skill 1 and Skill 2 makes up for it. Viable on both PVP/PVE, she makes everyone crazy tanky. She recently got buffed so she doesn’t die during clutch heal moments while using “Loving You”. She’s great with any line-up. The only downside to Amy is her slow skill animation on her Skill 1, so it’ll be easily interrupted if you’re not careful.

Lime has a lot of everything. 2 skills that heal both at 1 SP cost.Can provide shields. And also does a moderate amount of damage. Her free heals will be reliant on how fast she auto attacks. Her splash damage would be a better way to proc this effect so use her first skill to be in the middle of the mob! She also has a built-in cleanse. Very strong in both PVP/PVE.

I feel like Rin shines the brightest on PVP. PVE is a little so-so, for me. Lesser mobs have buffs that aren’t exactly too significant to remove or even non-existent; and the really strong enemy buffs on bosses are often “uncleansable“. Also, the mere fact that you have to use 5 skills to reach ‘Light’ or ‘Dark’ mode means you have to spend 5-10 SP just to fully utilize all her effects. They already buffed her by having free heals as long as you cleanse enemies but again, its reliant on other conditions.

For PVP though, she’ll be a headache to deal with on defense/offense as she deals damage,a null zone for 2 instances and heals for days. You’ll definitely get a lot of value outta her.

For my final verdict, I find her expensive to use (SP-wise) and reliant on numerous factors to be fully maximized. Is the return worth? PVP,  hell yes. PVE, I would rather use Lime or Amy with consistent effects.

KOG still managed to still portray her as a powerful mage with crazy damage numbers as a support hero but still retain her kind heart with her healing abilities. Her basic attack damage debuff works well with assault, rangers and even herself as her passive gives her autos splash damage. The splash damage was buffed from 50% – > 200%. People say she’s great in PVE. I can imagine. If only I had her, I’d love to test her out on the field.

But based from the numbers, she’ll really do well in PVE. Especially when you have to melt through mobs and bosses. Her only reliable heal is her 2nd skill that matches  other SR supports. They all fall around 230%-240%. The rest of her heal will be reliant on autos. (And I’m not sure how it works either but the healing rate looks very small. Hit me up if you know how the math works with her first skill.)

That’s it for me. Thanks for reading! Hope I helped decide which support to build this time around! There’s no “Queen of SR Supports”. Everyone can be viable and effective depending if its a raid, dungeon, adventure or PVP!

Again this is my opinion. Feel free to discuss your thoughts below!